FREE SHIPPING ON ALL ORDERS OVER £40 TO THE UK

The Pillars of Business & Bromance: An Urban Tonic Story…

Somewhere deep in the peninsula town of Newtownards, Northern Ireland… a man awakened to take on another new day.

With a bake drier than Gandhi’s flip-flops, he looked and pondered over the last wee squirt of Beard Oil in his bottle thinking..

“Do I replenish yet again my favourite, expensive oil?

When suddenly, it came to him. “I’ll make my own oil!”

A blank canvas Facebook page to showcase his journey was created some minutes later and Urban Tonic was born.

Adam was on a mission to bring some shit-hot products to the manly masses. He began to gather some first-hand knowledge of the barbering game, as well as a basic understanding of the male lotions and potions industry, and a clear-cut vision of the perfect products – he first created a Mojito Beard Oil that was sensual to the nostrils and light in both colour and consistency.

Whilst juggling the plates of everyday work and family life, Adam would go it alone on his Urban Tonic journey for some four years – bringing to life exciting new Beard Oils, Balms and Soaps along the way. He was making his mark, but he was just getting started.

It was in June 2015 to which Adam would first meet Conal as he wiped a drying cloth around the inside of a wet pint glass. Adam’s eyes were drawn to an individual on the other side of the Newtownards bar he’d been working in at the time.

That individual was a family first Derry man and self-confessed petrolhead – Conal Meenan.

As Conal munched his lunch, he had no idea Adam was in the process of getting his phone number from a mutual friend in his company on that day. Not for a night of heavy panting and belly rubs…but to talk ambassadors and business. Soon after, Adam sent the text asking to meet. Curious…Conal accepted and a kick-off conversation was had. Just like that.

During that conversation, Adam let Conal into his mind and shared with him his Urban Tonic vision. His passionate production processes. His quest to find the perfect brand ambassadors. Big branding and marketing ideas. Target audiences. Scents. Consistencies. What he’s learned. Where things were. Where things were going. The lot.

Adam wasted no time asking Conal if he’d throw a few poses as a beard model in an upcoming photo shoot. Almost taking the arm from Adam’s socket, Conal agreed. A date, time and location were set. Unbeknown to them Conal and his wife would go on to have their second child together that very day…….Conal still made the shoot that night.

Conal warmed to Adam’s enthusiasm and buzzed off his drive to become the best in the game. Four Years later they joined forces. Conal became an Urban Tonic partner, slash ambassador…and the pillars of both business and bromance were concreted.

Gorilla Glued together by a mutual love of all things family, good food, barbering, men’s health and local business, Adam and Conal (and their tight-knit support circles behind the scenes) have let nothing stand in the way of their shared vision for Urban Tonic. Be it reacting to the impact a global pandemic has on business, deliberating over coffee who’s the brains and who’s the beauty, being Conal’s rock when he kicked Cancer’s arse.

The Urban Tonic story is much more than your bog-standard ‘two dudes whip up a batch of beard oil in a Pyrex bowl’ guff.

With more than 20+ products (for now…) being sold in more than 100 shops across Northern Ireland and the rest of the UK, Adam and Conal’s mission to provide men with top-quality, no BS products that think outside the box is one worth keeping a very close eye on. 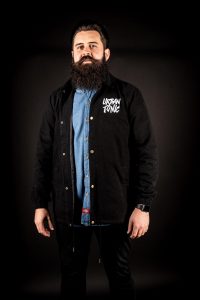 I hail from a background of hospitality up to the current day I am now a barber alongside Urban Tonic. I currently make and blend all the products that carry the Urban Tonic Logo. This means that every product you buy, hold or try has been made by me. It helps me quality check and control every product that leaves our workshop. I believe in making our own products so much that we even make our own material goods such as our Urban Tonic toiletry bags & barber aprons from scratch. 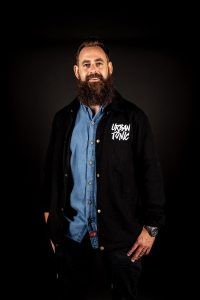 Im new to Urban Tonic in 2019 but Ive been involved with the brand pretty much from the beginning. I have attended various exhibitions and shows that the brand has supported and now its amazing to finally be a partner within the business. I maintain all the social media and advertising for the business so if you’re messaging any of our pages it’s likely me you’re talking to!

The guys at Urban Tonic will go above and beyond to ensure customer satisfaction - and it just so happens their products are the best in the business. Wholeheartedly recommended!
Nathan Thompson
Urban Tonic Customer
I’ve been using Urban Tonic beard oil for a couple of years now, I also recently purchased the Black Pomegranate Activated Charcoal Beard & Hair Shampoo and I’m so impressed with the quality of it. It leaves your beard feeling super clean and it smells so fresh. You can tell there’s a lot of time, expertise and passion put into all of their products. For anyone serious about beards and maintaining a healthy, fresh look, Urban Tonic!
Nathan Moore
Urban Tonic Customer
Great products,my boyfriends beard smells amazing and I'm forever stealing his soap bars. Loving the oatmeal and rhubarb,13/10 totally recommend. Almost wish I had a beard.
Zuzana Hradilova
Urban Tonic Customer
I’ve used their oil, balm and soaps for the last few months. The oat soap smells great, especially for sensitive skin. Would recommend it to anyone, the charcoal also does a great job. Just prefer the oats because I’m cautious about soaps on my face and around the beard. The beard balms and oils come in nice fragrances. Initially got the strawberry, but personably think the bay rum is the way to go. Online delivery arrived down in like 2 days, box, wash bag and soaps all in great condition.
Oisin O Murchu
Urban Tonic Customer

Our mission is to provide guys with high quality, simple and effective products that think outside the box without the BS.